M.K Stalin and KCR meeting on May 13 uncertain 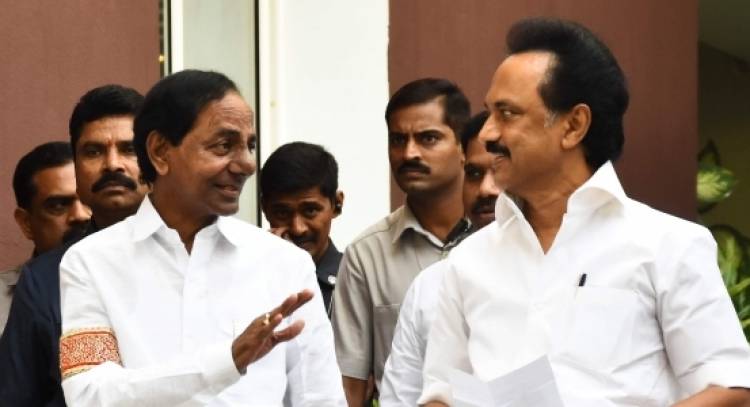 CHENNAI: Uncertainty prevails on the proposed meeting between Telangana Chief Minister K. Chandrasekhar Rao and DMK President M.K. Stalin on May 13 as the latter is yet to confirm the former's request, say DMK officials.

Rao is trying to form a non-Congress, non-BJP grouping of political parties.

The initial response of the DMK to Rao's proposal is lukewarm. Stalin is also busy with the campaign for the upcoming May 19 by-elections for four Tamil Nadu Assembly constituencies.

According to DMK officials, no confirmation has been communicated to Rao for the May 13 meeting proposed by him.

"It was Stalin who had proposed Congress President Rahul Gandhi's name for the Prime Minister's post and continues to stick to that. On the other hand, Rao is trying to promote a non-BJP, non-Congress front," a DMK leader told IANS.

Perhaps, as a mark of courtesy, Stalin may meet Rao.

According to the DMK leader, the stability of the government at the Centre may be an issue in the case of a third front as the previous experiences were not good.

Stalin said KCR was in talks with other political parties and he would himself talk about various issues with other like-minded parties in Tamil Nadu and at different levels within the DMK.

KCR, the founder of Telangana's ruling Telangana Rashtra Samithi, says India needs honest federalism and it should continue to remain a secular country.

Sergei Lavrov, Mike Pompeo to meet on May 14

RENAULT DELIVERS OVER 3000 CARS DURING DHANTERAS AND DIWALI

Chetan Bhagat launches his latest book ‘’The Girl in Room...

Chetan Bhagat launches his latest book ‘’The Girl in Room 105’’ by Westland Publications,...

Hyderabad FC is delighted to announce that Adil Khan has signed a new deal that...