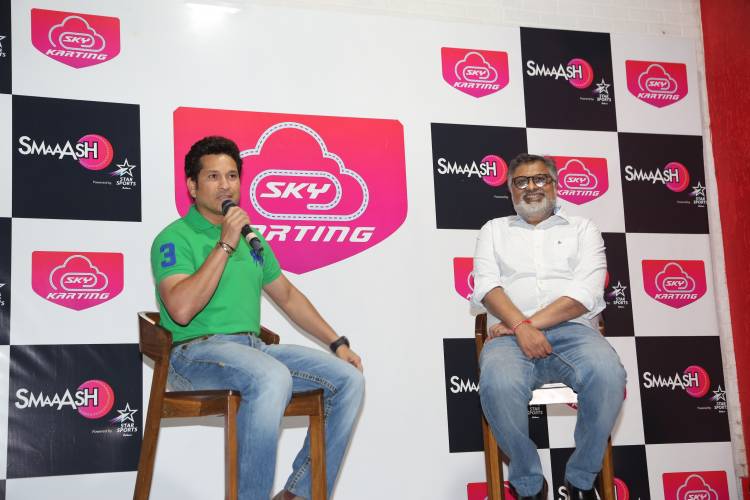 ~Surpass the past year revenue numbers by 22%~

Smaaash is founded by Shripal Morakhia & supported as a Brand Ambassador by Sachin Tendulkar, Shripal was behind institutional brokerage firm SSKI and retail brokerage firm Sharekhan. With operations having begun in 2012 with its first center of over 80,000 sq ft in Mumbai. Smaaash currently manages over 650,000 square feet of area in India. Smaaash owns and operates entertainment centers for sports such as cricket, football, go-karting, bowling and also virtual games with arcade games & carnival attractions with vending & redemptions games along with F&B in 41 centers in 19 cities across India along with one center in Jeddah, Kingdom of Saudi Arabia.

Smaaash crosses 300 Cr sales mark about seven years after it opened its first outlet. With 41 outlets as of December 2019, Smaaash's per store gross sales of Rs. 350-600 per sq ft on an average was at par with significantly higher than other popular restaurant & entertainment startups which entered during the same time as per the size & format of the store.  We have been selling our proprietary VR (virtual reality) and simulator games internationally, which have been installed in 30 plus countries until now,” Morakhia said. Games product sales to various other clients constitute about 36 Cr+ sales in the calendar year of 2019.  Entertainment is incomplete without a great array of food & drinks, Smaaash F&B revenue contributed about 100 Cr+ from 17 F&B locations in which it runs F&B with Games attractions. SMAAASH F&B is a one of its kind with a widespread food variety and multiple choices on drinks. The menu at each location is specially curated to give you an experience with games and unlimited access to great food.  Live music in Smaaash strikes a chord with our customers.  With one, two, three or more member bands playing all kinds of music at various Smaaash venues in big cities such as Delhi and Mumbai, gigs is the new buzzword in our F&B Entertainment sector. And getting into the groove are budding musicians who have found new career opportunities as well as audiences looking to combine their evening out with their love for live music, plus live music is also penetrating into segments like co-working spaces.

Smaaash received 5 million plus footfall in our centers in this duration of 1 year & we are planning to increase this by 10% in the calendar year 2020-21. Family Entertainment Centers (FECs) like Smaaash are being touted as the next big thing in the field of entertainment in shopping malls in India. These are small amusement parks or zones that serve local communities in all cities and are designed to keep the entire family engaged, for at least 4-5 visits per year on an average vs any amusement park where the visit is restricted to maximum twice a year.  Future Market Insights forecasts revenue from the Global Family/Indoor Entertainment Centers to reach US$ 61 Billion by 2027 end, representing a CAGR of 13.3 percent from 2017 to 2027. This increasing revenue growth is attributed to the continuous launch of new FECs supporting sustained growth of this market.  Shoppers today visit a mall to spend their leisure time in company of their friends or family and engaging in initiatives and activities that are otherwise not easily accessible to them. With e-commerce platforms making their inroads to everyone's smartphone, shopping is taking place within the comfort of one’s home as well but the adrenaline rush that one can experience at an FEC remains unmatched.

SMAAASH implores the child in you to joyously revel in an unmatched range of activities ranging from highly interactive sports simulators to many more thrilling and recreational attractions. Redefining sports entertainment and customer engagement with groundbreaking entertainment ideas and novel dining concepts, SMAAASH has something for everyone of any age making it a perfect destination for “kids” of all ages. The company acquired bowling venture bluO Entertainment from PVR and Major Cineplex Group and Sri Venkateshwara Multiplexes-owned SVM Bowling and Gaming for an undisclosed amount in the previous years. “The gaming and entertainment business benefited greatly from this consolidation, as the scale significantly enhanced operational efficiencies and brand value & helped us become India's biggest entertainment FEC chain". Morakhia added.

The Ever Growing Gaming Industry- with players like Nazara Technologies, NODWIN Gaming, Passion Gaming,  Dream 11 & other, the entertainment gaming space is booming at a fast pace. Compared to our global peers, India’s top entertainment centers are smaller in size and limited in terms of their offerings. The revenue from the sale of game cards accounts for approximately 75-85% of total revenues for most Indian centers across all FECs. In contrast, sale of game cards accounts only account for 45-55% of revenue in developed countries; the rest comes from food and beverage (F&B) sales and merchandising. “F&B sales and merchandising would contribute more to revenues in the coming years. We’re already seeing an uptick in our non-games revenues,” says Morakhia. Some of the key players that Smaaash competes with in the world are Dave & Buster’s, CEC Entertainment, Inc., Cinergy Entertainment, KidZania, Scene 75 Entertainment Centers, The Walt Disney Company, Lucky Strike Entertainment, FunCity, and LEGOLAND Discovery Center amongst others.

At Smaaash in the last 1 year, we have upgraded our centers by adding new arcade games, VR rides adapted for indoor functionality, and other gaming options like laser tag, Smaaash edutainment, Carnival games etc. In addition to this we have also made good use of the extra space by restructuring our games & restaurant areas and adding major attractions like trampoline wherever possible. The timely up gradation cycle at Smaaash serves as a perfect philosophy of what we work on for our guests where we say- at Smaaash, friends become family & family becomes friends.

With the increase in work pressure, not many people have the time to spend an entire day at theme parks and resorts. Family Entertainment Centers like Smaaash have provided them much needed entertainment avenues at convenient locations close to their homes. Increasing disposable incomes, coupled with limited leisure time, has led to the exponential growth of FECs.

Parents in India say a mix of digital and experiential...

Namma Madurai Sisters: A Brand-New Fiction Show Is All...

The Ministry of Civil Aviation is undertaking continuous efforts at policy level...