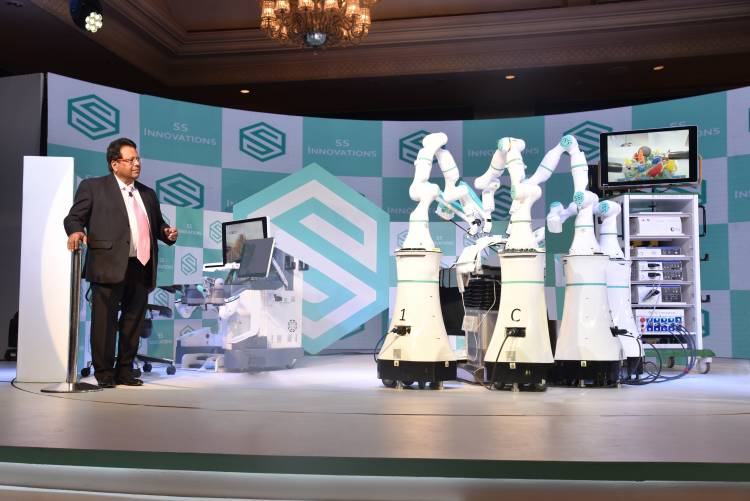 SS INNOVATIONS LAUNCHES SSI MANTRA
South Asia's First Medical Robotics Surgery System
~Announcing completion of Human Pilot Study with 18 Procedures at RGCI ~
Bengaluru, India, January 20, 2021: Despite decades of successful robotic-assisted surgeries globally that have positively impacted millions of patients, the access is scarceat large. The dominant current robotic system is expensive and associated with a steep learning curve, resulting in the limited availability across the world of over six billion population.
Taking this up as a challenge and leading with a vision to offer minimally invasive robotic surgery solutions, Dr. Sudhir P. Srivastava  and his team launched SSI MANTRA (Multi-Arm Novel Tele Robotic Assistance) Surgical Robotic System, with a live demonstration, in New Delhi, today. The event marked the presence of national media at the launch alongside attendance from dignitaries like Amitabh Kant, CEONitiAyogvia web-conferencing.
“Robotics shall be the future of surgery, and myvisionis to create a technologically advanced system that will be cost-effective, easy to use, andcan be applied to all surgical specialities. Thus, benefitting most patients around the world. Compared to conventional surgery, robotic surgery results in smaller incisions, that reduces pain, scarring and leads to quicker recovery.” said Dr. Srivastava, one of the early pioneers in minimally invasive and robotic cardiac surgery. He has performed over 1,400 robotic cardiac surgical procedures in the expanse of his career as a surgeon. It is his goal to build an affordable surgical robotic system that is easier for surgeons to use and provides easier accessibility for patients around the world.

The MANTRA system was recently utilised for the first in human pilot study at Rajiv Gandhi Cancer Institute, where the surgeons successfully completed 18 complex Urology, Gynaecology and General Surgery procedures in less than a month. Present at the launch event, Dr. Sudhir Rawal, Medical Director RGCI added,“The dedicated team of engineers and scientists at SS Innovations have been working hard under Dr. Srivastava's guidance for the past few years to develop a cost-effective robotic surgical system. I congratulate them on this launch. I have been closely involved in the clinical trials myself, and the results have been outstanding."

DISCLAIMER: The MANTRA system is currently not available for sale in the market.

About Dr. Sudhir. P. Srivastava
Popularly known as a Leader in Robotic Cardiac Surgery by International media, Dr. Srivastavais a specialist and pioneer in minimally invasive coronary artery bypass robotic surgery. Dr. Srivastavahas performed over 1400 robotic cardiothoracic surgeries including over 750 beating heart Totally Endoscopic Coronary Artery Bypass (TECAB) procedures, that represents the largest experience in the world.  In addition to having performed many world’s first TECAB procedures and while serving as an Assistant Professor and Director of Cardiac Robotic Surgery at the esteemed University of Chicago, Dr. Srivastava performed the world’s first quadruple bypass surgery on a beating heart in a totally closed chest approach utilising surgical robotic assistance.

Having received his medical degree at J.L.N. Medical College in Rajasthan, he completed his residency in Cardiothoracic Surgery at the University of British Columbia in Vancouver, Canada. Dr. Srivastavawas the Founding Chairman for  Alliance Hospital, a centre of excellence in Cardiovascular Disease in West Texas.  Additionally, he was the Founder President of the International College of Robotic Surgery in Atlanta, Georgia. In 2011, he returned to his motherland, India and launched the International Centrefor Robotic Surgery in New Delhi.  Dr. Srivastava has been a highly sought after and inspirational speaker at many international scientific meetings in the field of Cardiothoracic Surgery.

It was his passion to expand less traumatic, minimally invasive surgical techniques that drove him to teach and train over 350 teams globally in robotic coronary bypass procedures. This mission itself was the inspiration for Dr. Srivastava and his team that resulted in the development of Multi-Arm Novel Tele Robotic Assistance, "Mantra" Surgical Robotic System.

About SS Innovations
SS Innovations was established by its founder Dr. Sudhir Srivastava in 2016 with the goal of providing an advanced, cost-effective surgical robotic system. SS Innovations is improving the quality of robotic surgical systems. Founder and CEO, Dr. Sudhir Srivastava, has made it his personal mission to find ways to improve accessibility to robotic surgical procedures through the union of clinical experience, patient outreach, and technology development. At SS Innovations, research and development are advanced with a focus on patients, across the world, benefitting from new technologies.

The company has already raised over 300 Crores (USD 40 Million) in the last 3 years and plans to launch the next round of funding with the goal to raise between 700 to 1000 Crores (USD 100-150 Million) to help establish the manufacturing, assembly, infrastructure and clinical support for its global launch that will be starting from India.

The company's India headquarters are currently located in the Andhra Pradesh Medical Technology Zone (AMTZ), Visakhapatnam, AP.  AMTZ is the first medical device technology park in India for the "Make in India" initiative from Prime Minister Narendra Modi.  The company has a team of highly talented engineers, the majority of whom are from India, additionally, several world renown pioneers in the field of robotic surgical technology from around the world are associated with SS Innovations.

For all mango lovers and food connoisseurs,

The inaugural edition of the National Amateur Golf League .....