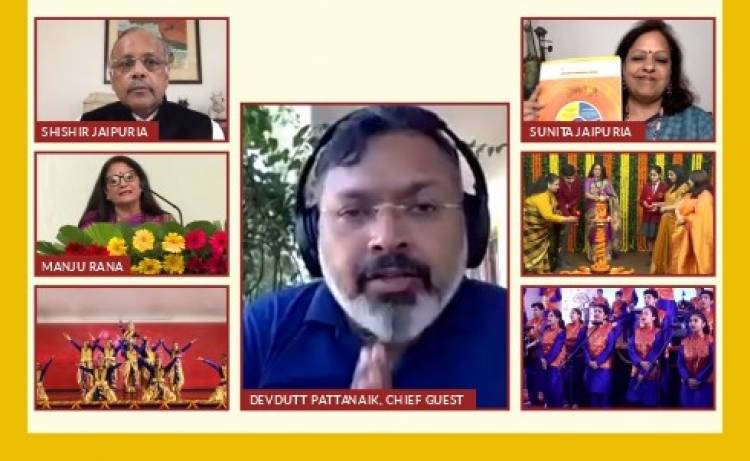 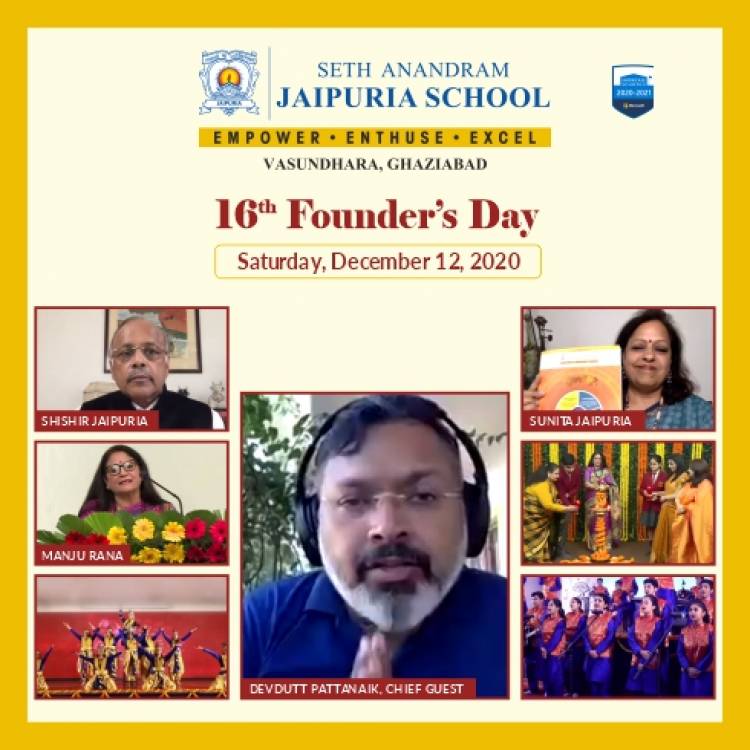 Celebrations commenced with the lighting of the ceremonial lamp at 4pm. It was livestreamed on the Facebook page of Seth Anandram Jaipuria School, Ghaziabad. A short address by the Chairman set the tone for the evening, which saw a whole host of events, including a vivacious orchestra performance by the budding musicians of the school.

‘Life is to be lived each moment with a new ray of hope and optimism’ - this message formed the gist of the musical performance. The talented students also performed a musical ballet called ‘The Selfish Giant’, based on an enchanting adaptation of an Oscar Wildefairy tale that upholds the pertinent message of healing the earth.

The celebrations peaked with the virtual appearance of author DevduttPattnaik, who regaled one and all with his eloquent talk that touched upon a whole range of interesting topics.

In his address, DevduttPattnaik applauded the invincible spirit of the students and the school in these extraordinary times and observed that the Founder’s Day theme of pursuing joy in every element of the universe can be the key to solving the toughest of problems in this world.

During the event, creativity was feted in the ‘Virtual Exhibition - Pursuit of Happiness’ that featured beautiful paintings, jaw-dropping clay work and exquisite pottery work done by the young artists of Jaipuria. Each artwork expressed the need to transform the earth by appreciating everything better: be it nature, friends, travelling, gratitude for what we have, relationships and above all the power of love.

The 16th Founder’s Day also witnessed the digital release of ‘Ignite - The School Chronicle’, which showcases the students’ zeal in these unprecedented times.  Meritorious students excelling in academics and co-curricular activities were awarded and the teachers completing 10 years of dedicated service were felicitated. The school’s alumna, Kanika Gupta, 2012-13 batch, talked about the journey of her successful career and how the school, through its child-centric holistic approach, played a pivotal role in laying a strong intellectual foundation forher.

The Principal-cum-Director, Manju Rana, read the school’s repertoire and talked about the milestones achieved by the school in the year gone by.

Earlier in his address, the Chairman Shishir Jaipuria expressed great pride in the fact that the Ghaziabad school has been recognized among the top 50 schools of the country. He praised the relentless efforts of the school in reaching out to the students with optimum use of technology for the uninterrupted flow of quality education during this pandemic. He also applauded the collaborative endeavours of the faculty, parents and students in this direction.

The virtual event was attended by more than 3000 parents, a first of its kind in Jaipuria’s illustrious history. Principals of Core and Partner Schools (SAJS), Head Mistress SonalSrivastava and Indu Kohli and other members of the school’s management committee were present throughout the function.

The celebrations came to an end with a vote of thanks by the Vice Principal V. Suprabha.

Imperative for businesses to join hands with govt, civil

At such a time, it is imperative for businesses to join hands with the governments,...

Need for policy intervention to minimise impact of COVID-19...

There is an urgent need to take immediate steps to contain the spread of coronavirus...