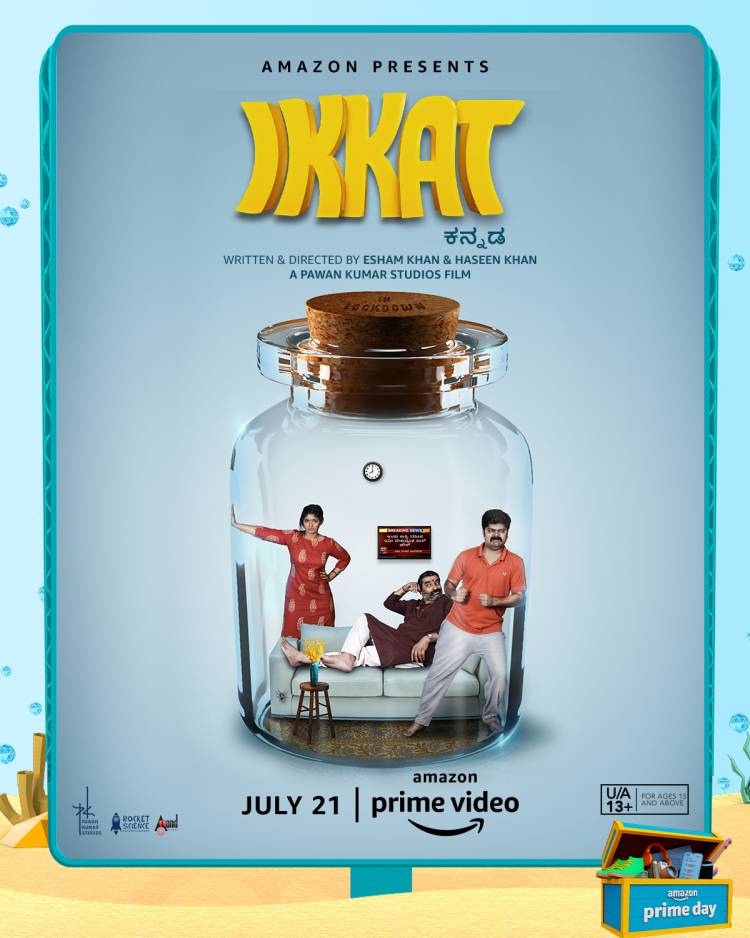 Prime members in India and across 240 countries and territories can stream the exclusive digital premiere of Ikkat, as part of the Prime Day celebrations

Chennai, India, 13 July, 2021: As part of its much-awaited Prime Day celebrations, Amazon Prime Video presents its audience with Ikkat, a hilarious Kannada comedy drama set right in the middle of the lockdown. Guaranteed to take the viewers on a roller-coaster ride filled with some relatable, fun and hearty laughs, Ikkat stars ace comedian and actor, Nagabhushana and Bhoomi Shetty in lead roles, along with RJ Vikki, Sundar Veena, Anand Ninasam and Naveen Chethana in pivotal roles. A Pawan Kumar Studios film & a Rocket Science Entertainment Production and directed by duo Esham and Haseen Khan, the comedy entertainer is set to unlock globally on 21st July, 2021 in India and across 240 countries and territories on Amazon Prime Video.

Ikkat, which means ‘congestion’ or ‘to be in a tight situation’, much like a lockdown. As seen in the trailer, Ikkat is a witty bag of laughs which follows the lives of an unhappily married couple who are on the verge of getting a divorce. With the announcement of the nation-wide lockdown due to the pandemic, they are left with no choice and are reluctantly forced to spend time with each other. The film follows the daily routine of the couple unwillingly stuck together who begin to experience some unexpected surprises that pepper their lives from time to time.

Vijay Subramaniam, Director and Head, Content, Amazon Prime Video, India said, "Ikkat is a wholesome comedy drama, which is sure to give our Kannada audience a dose of pure made-for-the-lockdown laughter and entertainment. We are delighted to offer varied regional content to our customers and expand our library with entertainers like Ikkat. This film will launch as part of our Prime Day celebration in India, and we are confident that our Kannada audience will enjoy watching it with their families at home.”

Director duo Esham and Haseen Khan said, “It was the lockdown that inspired us to make Ikkat. There was a time during the initial stages of the pandemic when the whole world was in a very somber mood as we all were experiencing a difficult time. However, with Ikkat we have attempted to showcase these unprecedented times through a humorous lens. The quirky storyline, the talent and their stupendous comic timing is what makes the film an absolute fun watch. We are extremely excited to showcase our work on a global streaming platform such as Amazon Prime Video.”

Added, Actor Nagabhushana N S, “Ikkat is truly a unique film. As it is based on the lockdown, there is a sense of relatability that is associated with it. It is a hilarious story and I am sure that it will be a great watch for viewers across the globe who will enjoy the situational comedy setting of the film. I couldn’t be more excited about the movie’s release on Prime Video in over 240 countries and territories, as part of the Prime Day line-up.”

Actor Bhoomi Shetty who makes her film debut with Ikkat, said, “I am thrilled to make my foray into films and also my digital debut with Ikkat, a completely crazy comedy-drama which everyone will relate to. It was offered to me when I least expected it, when things were completely on a stand-still because of the lockdown. I had such a blast during the story narration that I knew right away that I had to do this film. Ikkat is a super special movie for me and we had an amazing time shooting for it. I am sure Prime viewers across the world will enjoy this film.”

Prime Video is a premium streaming service that offers Prime members a collection of award-winning Amazon Original series, thousands of movies and TV shows—all with the ease of finding what they love to watch in one place. Find out more at PrimeVideo.com.

A meeting of the Cabinet Committee on Security (CCS) was underway on Tuesday at...