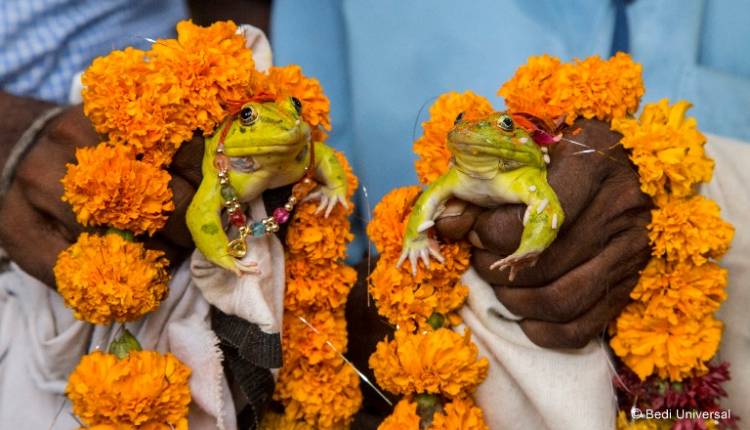 The internationally acclaimed film by award winning wildlife film makers, Vijay and Ajay Bedi, is an ode to these tiny creatures and a plea to save them from extinction

Mumbai, April 25, 2019 – Animal Planet, India’s No. 1 Wildlife channel, will premiere the first ever documentary film that focuses exclusively on amphibians of India - ‘The Secret Life of Frogs’ on May 1st at 21:00 hrs. Shot painstakingly over three years, the film is directed by the award-wining third generation of wildlife filmmakers – Vijay and Ajay Bedi. The Bedi brothers capture species that have their own unique story to tell – a frog that uses dance moves to seduce its mate, another that does a headstand, or the ‘potter frog’ that gently encases his eggs in clay to protect from predators. This film throws up behavioral facts hitherto unknown to science, documenting for the first time the entire life cycle of the highly endangered, rare purple frog that emerges from underground to breed for just one day in a year. Catch ‘The Secret Life of Frogs’ on May 01 at 21:00 hrs on Animal Planet and Animal Planet HD World.

The Secret Life of Frogs will premiere as a part of new anthology ‘Animal Planet Presents’ which showcases award winning films all weekdays – Monday to Friday at 9:00 pm. The anthology includes multiple award-winning films like ‘Tigerland, ‘A Wolf’s Journey’, legacy hit series like ‘Dodo Heroes’ ‘Epic Yellowstone’ and ‘Ivory Wars’.

The Secret Life of Frogs is a quest to draw attention to these tiny creatures as old as dinosaurs yet still a mystery to science.  The quest is important as more than 80% of the 400 species of amphibians found in India are already on the endangered list.  Some have not been seen from 18 to as long as 170 years. The figures are dire but important especially when one considers that about 60% of amphibians are endemic to the sub-continent.

Zulfia Waris, Vice President, Premium & Digital Networks, Discovery Communications India, said, “The Secret Life of Frogs has been told in an easy lyrical way. The aim is to draw attention to fossorial creatures that seldom receive conservation attention. The film is an ode to amphibians, it is also a plea to save them.”

“At a time when film makers take pride in charismatic megafauna, we have chosen tiny creatures as the heroes of our film. We realize this is a huge risk, but it is worth it, as no one is telling the story of frogs. The handful of people working for their conservation need to be celebrated as well, they too are heroes in our film,” said, Bedi Brothers – Ajay and Vijay. “I still remember where I live in Delhi, we used to hear the gentle murmur of frogs calling from the neighborhood parks as the monsoon hit North India, those croaks have gone silent. Across the world a dreaded disease called the Chytrid fungus is wiping out frog species in large numbers. In India too, a complex set of reasons from roads cutting through their habitats to climate change to mini hydel dams in the forest is endangering species.  With so much attention focused on tigers and megafauna, the amphibians of India are fighting a lonely battle for survival.  Somehow, we have forgotten how rich our country is in other forms of life.  Our hope through ’The Secret Life of Frogs’ is to ignite inspiration for an army of frog champions.”

Leading scientists such as Dr. SD Biju from Delhi University, Dr. Gururaja from Gubbi Labs and a team of young passionate scientists studying these unique creatures have been an integral part of the film's journey in spreading awareness towards conservation of amphibians.

Get up-close and personal with The Secret Life of Frogs as award winning wildlife film makers Ajay and Vijay Bedi take you through the swampy forests of India on Animal Planet and Animal Planet HD World on May 01, 2019 only at 21:00 hrs.

Our hands white and wrinkled, our gum boots full of cold water and we were shivering. This was our story every day walking through swampy streams and rivers of the Western Ghats in search of frogs. As a third generation of wildlife film makers and photographer, my twin brother Ajay and I have since the age of 5 worked closely with my father and his father (our grandfather Dr. Ramesh Bedi) tracking elephants in Corbett or tigers in Bandavgarh. Our toughest assignment we thought was trying to find the elusive red panda in the mountains of Kanchenjunga, an animal that is rarely seen. Filming any wild species poses a challenge, but we hadn’t anticipated just how complex it would be filming creatures tinier than a human thumb. It has been a nerve wrecking assignment both physically and technologically for us

When we talk about amphibians, water is the key element, as they breathe through their skin, so they need very high humidity levels. For a cameraperson with expensive equipment, this was a technological nightmare trying to keep our filming gear dry every second. The second challenge was the light, as amphibians normally come out night. We were sure we didn’t want to harm the creatures with bright lights nor interfere with their natural behavior by placing them close to our camera lens. Every sequence for the film had to be shot, as if we didn’t exist. While there are many scientists who have worked on the taxonomy of amphibians, so little is known about their behavior. And so, we set about the onerous task of filming Amphibians of India, a mission that would take long 3 years.