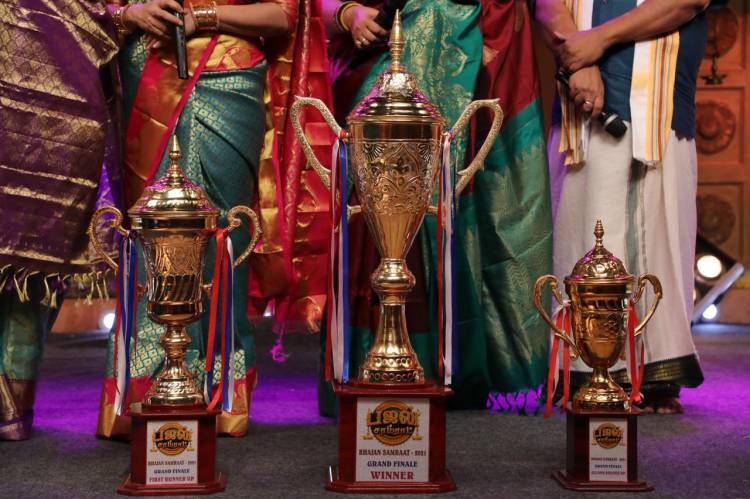 Chennai, 12th April 2021: Colors Tamil, the much loved GEC of Tamil Nadu is all set for the grand finale of its divine reality show - Bhajan Samraat. The show promises to be a visual treat as the best 4 teams line up to battle it out for the coveted title. As many as 24 teams had been in the fray at the beginning, making it one of the most hotly contested show. With eminent Carnatic singers namely Dr. R Ganesh and Ms. Mahathi steering the show as judges, we give you three reasons to tune in to Bhajan Samraat’s Grand Finale on Colors Tamil from 12th April to 14th April 2021 at 7 AM.

Classic Treat: With title of Bhajan Samraat at stake, the last 4 standing teams of the show will surely take their performances a notch higher, with superimposed nuances and techniques in Carnatic music. As the battle marches to its grand closure, the week's episode promises to offer a soulful experience to the viewers.

Grand Closure: Hosted by the charming VJ Priyadarshini, the grand finale episode of Bhajan Samraat will put the spotlight firmly on rare bhajans including intricate Kritis. The show is all set to win the hearts of the audience.

Don’t forget to catch all the excitement of Bhajan Samraat's grand finale and cheer for your favourite team only on Colors Tamil’s Bhajan Samraat, Monday to Wednesday (12th April to 14th April) at 7 AM. Colors Tamil is available on all leading cable networks and DTH platforms - Sun Direct (CH NO 128), Tata Sky (CHN NO1515), Airtel (CHN NO 763), Dish TV (CHN NO 1808) and Videocon D2H (CHN NO 553). Viewers can also tune in to VOOT any time to see them at their convenience.

Fujitsu General to focus on the Mass Indian AC market for...

Paytm Payments Bank will issue Visa virtual debit cards to its customers, which...

What is yesteryear actor Urvashi doing with Thirumanam...

After stealing the hearts of movie audiences with her versatile acting, film star...