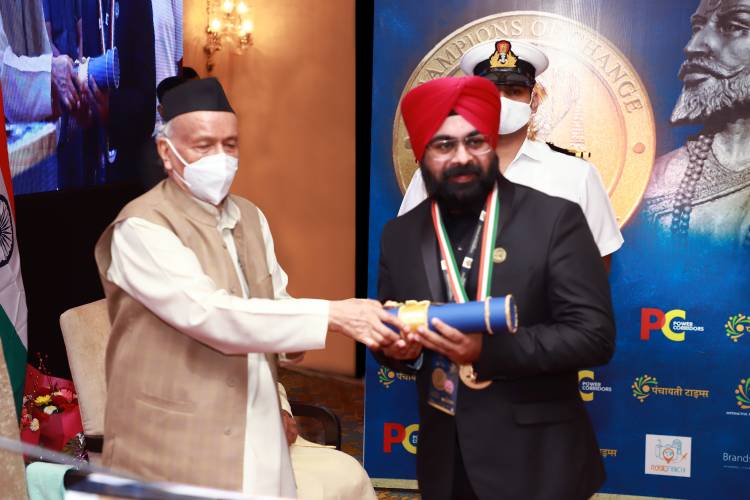 # Jaspal Singh holds a record in Asia Book of Records for the title, 'Maximum UPSC qualified candidates mentored by an individual'

# Jaspal Singh said that all the honors in his journey go to his family, colleagues, and students

Mumbai: Unacademy educator Jaspal Singh, known for mentoring lakhs of young students in the country has been honored with the 'Champions of Change' National Award, for his outstanding contribution and exemplary work he has done in the field of Indian education. Jaspal Singh received the National  Award from the Honorable Governor of Maharashtra HE Bhagat Singh Koshiyari at the Taj Mahal Hotel Palace Mumbai, on September 30. Jaspal Singh was selected as the winner of the Champions of Change National Award by a jury panel headed by Justice Gyan Sudha Mishra, former Supreme Court Judge of India.

While speaking at the occasion of the Champions of Change National Award ceremony, Maharastra Governor Shri Koshiyari said, "The contributors of educators like Jaspal Singh to the Indian educational sector is remarkable. The way in which he treats his students is something everyone should learn. I hope Jaspal Singh will continue his journey in the field of education in a more impeccable manner in the future, thus empowering and revolutionizing the quality of Indian education. I hereby congratulate Jaspal Singh for achieving this honor."

"All the credits of this honor go to my family, colleagues, and my beloved students. Without them, I would not have achieved it. I want to make GATE, ESE, and UPSC exams assailable to every student. Honors like these are very precious for me, and they will help me to work more hard in the future to bring the best from my students. Most of the students consider civil engineering as conventional and boring. To overcome this issue, I always try to introduce new pedagogies and used them to make students think out of the box. Frankly speaking, the biggest motivator for me is the fact that my students look up to me with lots of expectations," said Jaspal Singh after receiving the honor.

It was in 2011 that Jaspal Singh left his job as an Assistant Executive Engineer in CPWD to pursue his passion for teaching. Initially, he joined ' MadeEasy '  as an educator. Later, he joined ' Unacademy '  and started coaching GATE and ESE aspirants.  Jaspal Singh holds a record in Asia Book of Record for the title, 'Maximum UPSC qualified candidates mentored by an individual.'  He mentored one lakh aspirants, out of which 1396 qualified the Engineering Services Examination (ESE) (with All India Ranks), conducted by UPSC from 2012 to 2020,".

The beach side resort, Intercontinental Chennai Mahabalipuram Resort is bringing...