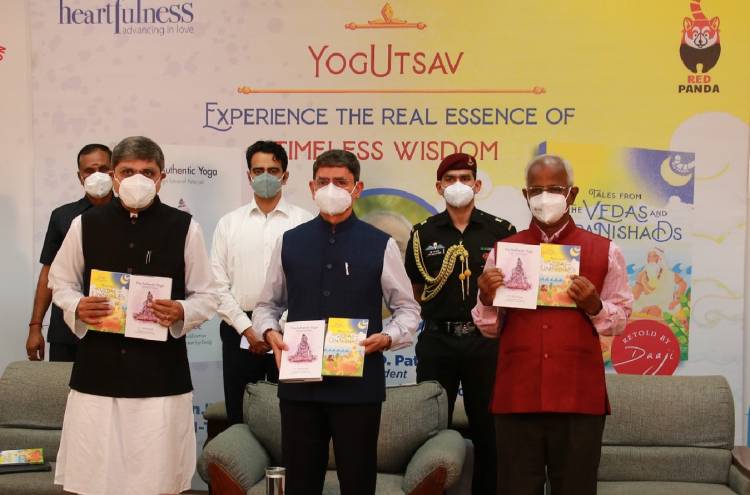 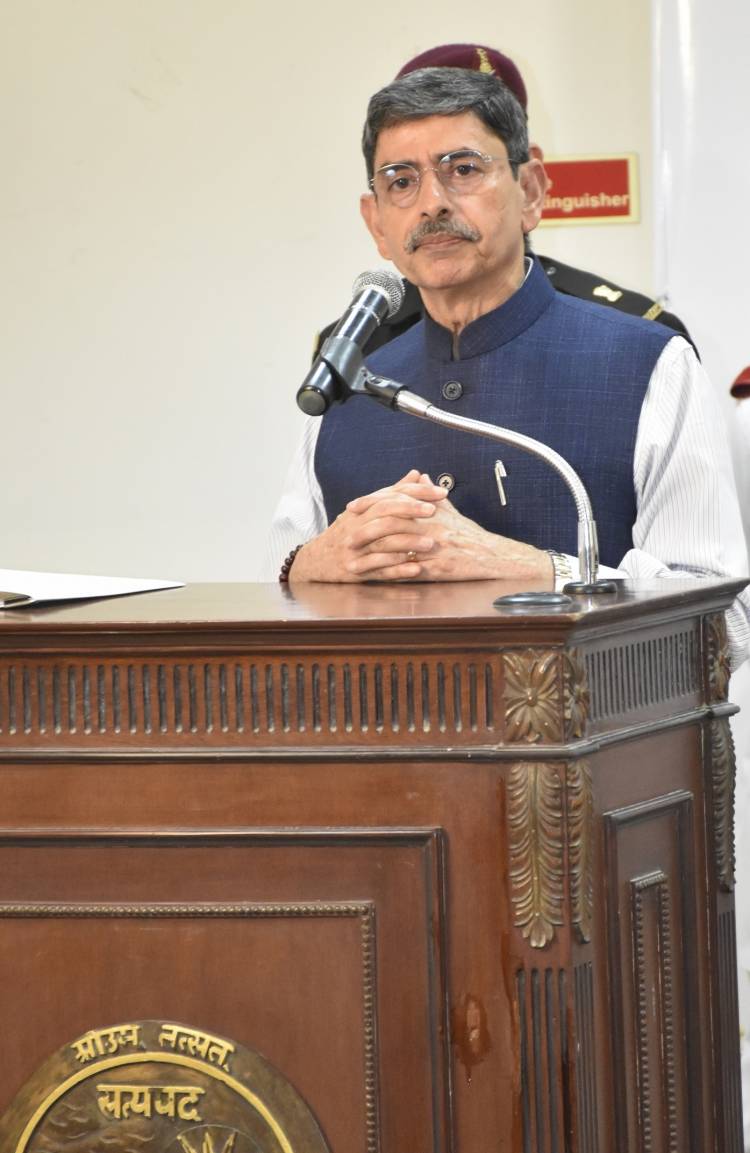 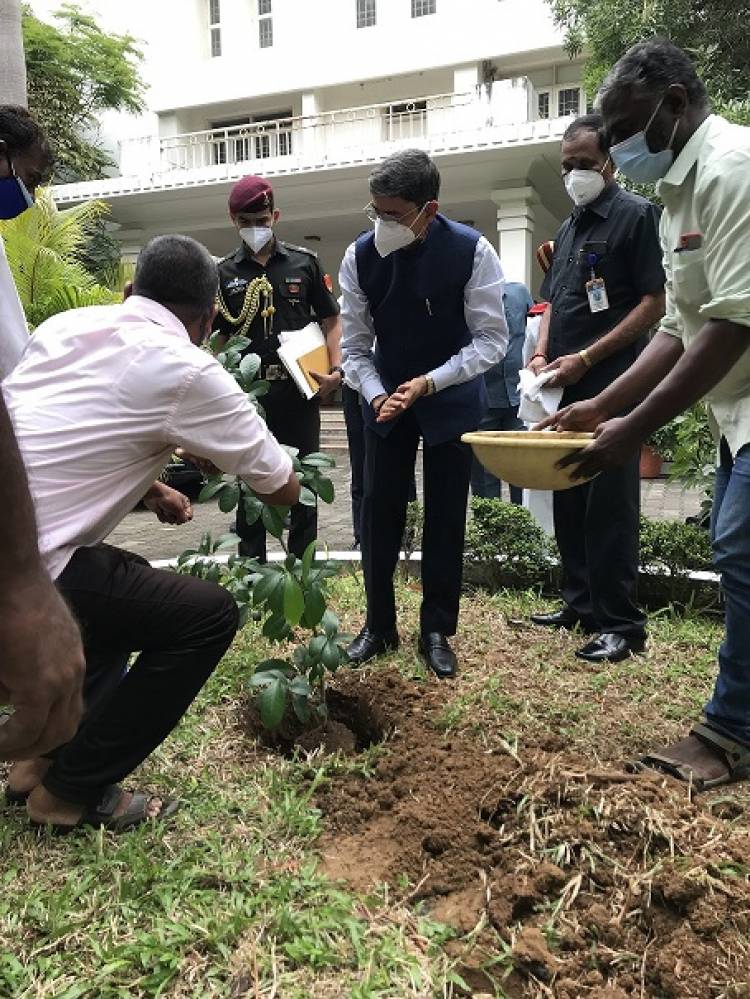 Please find enclosed the Press Release, Governor Speech and photographs. Request you to kindly publish the news along with the photographs in your esteemed publication

Chennai, 29 January 2022: Heartfulness launched two books as part of their Timeless Wisdom/YogUtsav celebrations. The event was presided over by the Hon’ble Governor of Tamil Nadu, Thiru R. N. Ravi who launched the books called ‘The Authentic Yoga’ and ‘Tales from the Vedas and Upanishads’ from Heartfulness. The event brought together the magic of books and Yoga as well as Meditation in day-to-day life and made practical knowledge on Yoga and Meditation accessible to all through these two book launches. The event was attended by several Thought Leaders, Educationists, Yoga Enthusiasts, Social Influencers, and other professionals at Heartfulness Centre, Manapakkam, Chennai.

Tales from The Vedas and Upanishads has a collection of 25 stories retold by Guide of Heartfulness - Daaji and is meant especially for children. The book published by Red Panda (Westland Publications) intends at introducing children to virtues in simplistic way. The Authentic Yoga on the other hand is highly philosophical although written in a simple language. The beauty of the two books is not only in bringing traditional wisdom within the means of the common man in a decipherable way, but also the breaking the cliché of the benefits of Yoga and taking them one notch ahead that makes them valuable.

Originally written by Shri P. Y. Deshpande, The Authentic Yoga is quite a departure for him to write it in English because he was originally a Marathi novelist. It was Deshpande’s meeting with J. Krishnamurthy in 1961, that got him into spirituality and wrote a series of books. His book on Yoga Sutras in English put him at an international stage as a great writer and as a highly regarding philosopher. Daaji has written the Forward and an additional chapter at the end of the book so as to bring Deshpande’s school of Yoga to modern consciousness. Daaji’s chapter in the book talks about how to take what Deshpande said and translate it practically in modern-day life. It is also beautifully laid out and easy to read unlike what it was in the ‘60s.

Releasing a book titled, ‘The Authentic Yoga’ by Shri. P. Y. Deshpande published by the Heartfulness Institute, the Hon’ble Governor Thiru R. N. Ravi said, “It was about 6,500 years ago that our rishis came to the fundamental realization of unity of creation. Like the millions of leaves are unique and different from each other but are connected through a tree, all living beings are also inter-connected with each other. The creation is governed by immutable laws and forces that go beyond the reasoning of mere intellect. Our rishis taught us to understand creation through the intellect combined with anubhuti, intuitive experience.

“Rishi Patanjali helped us understand our ancient wisdom through his yoga sutras. The moment we realise that we are integrally connected, it takes away differences and conflicts. The ethnocentric view of life that humans are at the center of creation and everything else is just for our enjoyment is leading to reckless destruction of nature. This is opposed to the ancient Bharath view that we are not at the center of existence, but we are a part of the whole. Understanding this will help us move away from exploitation to co-existence. Yoga is essentially realization of connecting ourselves but what comes in the way is the sense of ‘I’ ness’, which gives rise to conflict. Our approach should begin with a healthy body because body is the

medium of performing all our duties, and a healthy body can train the mind to be healthy to overcome the self-centered nature.”

Releasing a book for Children titled, ‘Tales from the Vedas and Upanishads’ by Daaji, the Governor added, “A child who reads a story also resonates with the emotions and develops a compassionate response. Books like these awaken the dormant goodness and such stories help children to nurture their wisdom at an impressionable age.” He also said, “India must grow to transmit its vision of a unified world drawing on our value systems and ancient wisdom.”

Revered Daaji, Guide of Heartfulness says, “Our current and future generations need to understand the essence of Yoga beyond using it as a wellness tool. Deshpande has enunciated the Yoga Sutras by Patanjali in a brilliant way. I have only made the effort to bring it to common man in a way that one can put into daily practice. Yoga has to begin with character-building than merely adopting the asanas. Yoga means ‘Unity’. One’s effort must to find the unity within that will eventually lead to bliss. While Niyama and Yama aspects of Yoga deal with character-building, for children Tales from the Vedas and Upanishads does the job. The beautiful stories from ancient India help children to inculcate virtues early on. In retelling these legends, I hope I can be of help in building a strong budding generation of intellectual children.”

The Authentic Yoga raises the cliché of Yoga as physical exercise. The book teaches us that what stops us from attaining a Yogic state is our desires, our likes and dislikes. The book explains how we can relate to the human complexities, the emotions and the impediments in the path of attaining true bliss; while also

explaining the nature of existence in terms of matter and the universe. Patanjali’s Yoga Sutras propounded by Deshpande is taken one step further with a practical approach by Daaji. Daaji suggests the means to overcome the impediments and remove them from the system. On the other hand, Tales from the Vedas and Upanishads inspires children to tread the path of righteousness in the modern times that are given to materialistic inclinations. It takes a beautiful approach to help children stay close to our roots and ancient Indian wisdom.

The Authentic Yoga and Tales from the Vedas and Upanishads is available in India on amazon.in.

Timeless Wisdom/YogUtsav is devised to launch a series of events from Heartfulness that aim to elevate the human consciousness with nuggets of wisdom useful to all generations. The events will touch upon the essence of our ancient scriptures, the science of Yoga, character-building, holistic wellness, balance in life, inner harmony and our relation as humans with the universe.

The event opened with the National Anthem followed by a welcome Address by Thiru. Venkat Lakshminarasimha. This was followed by Guide of Heartfulness - Daaji’s message about the two books -  ‘The Authentic Yoga’ and ‘Tales from the Vedas and Upanishads’. Dr. Veronique Nicolai, Director, Heartfulness Yoga Institute threw light on Heartfulness Initiatives as Yoga as highlight. Dr. K.S. Balasubrahmaniam, Dy Director Kuppuswamy Research Institute introduced Daaji’s book and spoke on the relevance of ‘Patanjali’s Yoga Sutras viz., Ashtang Yoga. Mr. Prashanth Vasu, Working Committee Member of SRCM, Author & Ex-Partner in McKinsey introduced the children’s book ‘Tales from the Vedas and Upanishads’. Smt Nalina Ramalingam, Parents’ Circle spoke on the early inculcation of Ancient Indian values in children. Hon’ble Governor of Tamil Nadu spoke on the occasion enlightening on the importance of preserving our ancient wisdom in the current times.

About Heartfulness: Heartfulness offers a simple set of meditative practices and lifestyle changes, first developed at the turn of the twentieth century and formalized into teaching through Shri Ram Chandra Mission in 1945 in India with a goal to bring peace, happiness and wisdom to one heart at a time. These practices are a modern form of Yoga designed to support contentment, inner calm, and stillness, compassion, courage, and clarity of thought, as the first step towards a purposeful life. They are simple and easily adopted and are appropriate for people from all walks of life, cultures, religious beliefs, and economic situations, who are over the age of fifteen. Ongoing training in Heartfulness practices is going on at thousands of schools and colleges, and over 100,000 professionals are meditating in corporations, non-governmental, and government bodies worldwide. More than 5,000 Heartfulness Centers are supported by many thousands of certified volunteer trainers and millions of practitioners in 160 countries.

Inspired by 8-year-old Prasiddhi, Vidyut Jammwal promises to plant a forest with...