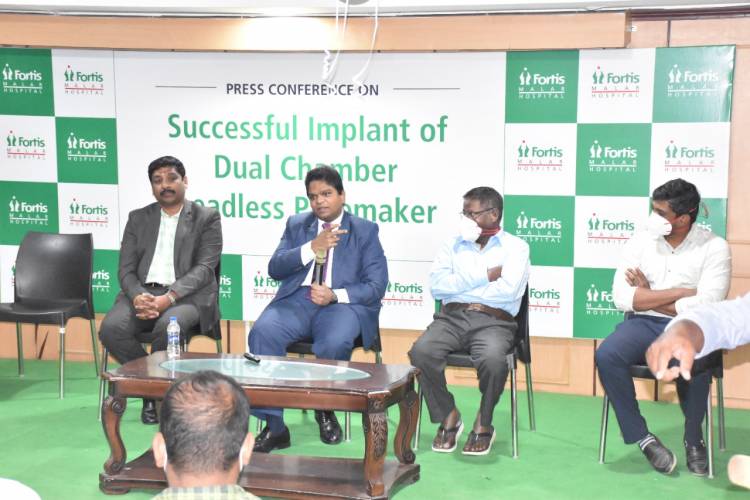 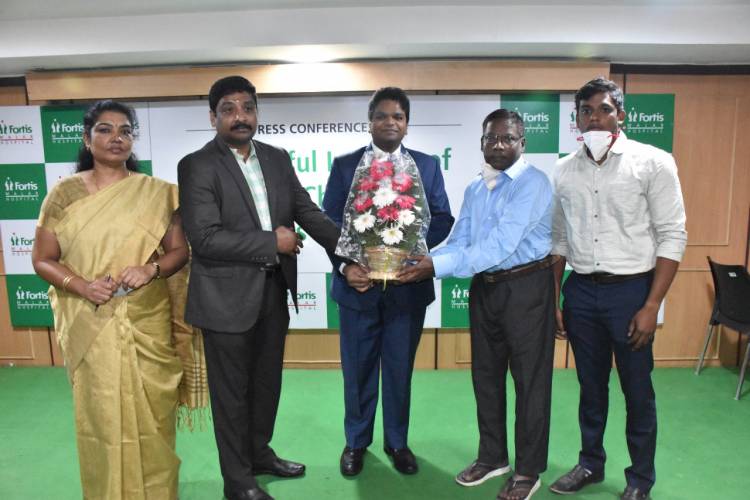 • Timely treatment with Pacemaker provided a new lease of life to a man suffering from multiple co-morbidities – patient was on dialysis and had COVID Pneumonia
Chennai, 9th March 2022: The cardiac team headed by Dr. Babu Ezhumalai at Fortis Malar Hospital, Adyar have successfully implanted the first dual-chamber leadless permanent pacemaker through a non-surgical procedure in two elderly patients. Timely treatment by the expert doctor provided a new lease of life to the 60-year-old patient who was suddenly diagnosed with cardiac issues and was suffering from other comorbidities such as COVID pneumonia, diabetes, hypertension, renal failure and had been on dialysis too.
The 60-year-old patient was brought to Fortis Malar Hospital at Adyar in a critical condition with heart attack and low heart rate. He was also suffering from renal failure and was diagnosed COVID positive too. Since the patient has also been under dialysis the expert team had to identify a solution that would not affect the ongoing dialysis process. They concluded for a dual-chamber leadless pacemaker that can be implanted to the patient during dialysis and on blood thinner medication. The patient was briefed on the benefits of a leadless pacemaker over the conventional pacemaker with lead. The medical team led by Dr. Babu Ezhumalai implanted the dual chamber leadless pacemaker through a non-surgical procedure successfully.
The second case was that of a 92-year-old man who was implanted with dual chamber leadless permanent pacemaker. The patient was presented with very low heart rate of 33 beats per minute and episodes of fainting. The implantation procedure lasted for approximately 30 minutes; he became ambulant and got discharged 24 hours after the procedure. He is now able to carry out his daily tasks smoothly. In addition to dual chamber leadless pacemakers, many single chamber leadless pacemakers (Micra VR) have been implanted by Dr. Babu Ezhumalai at Fortis Malar Hospital since 2019. The youngest person to undergo single chamber leadless permanent pacemaker procedure was a young lady at 31 years of age with complex congenital heart disease.
Speaking about the procedure Dr. Babu Ezhumalai, Senior Consultant, Interventional Cardiologist, Fortis Malar said “Both the cases were challenging, considering the age and comorbidities of the patients. The advantage of using a leadless pacemaker over the conventional pacemaker is that it can be implanted without stopping the blood thinner medication. The lead in conventional pacemaker passes through venous blood vessel drainage pathway of the upper limbs. In the long run, this venous pathway can get blocked which may cause devastating effects in patients with chronic kidney diseases undergoing dialysis.
Leadless pacemaker is a boon for kidney patients as their veins can be kept patent lifelong for dialysis. The major advantage of dual-chamber over single chamber pacemaker is that this technology can control the heart rate during pacing, minimal antibiotic usage. The best advantage of implanting a leadless pacemaker is that it reduces the hospital stay, the patients can return home within 24 hours of the procedure, long pacemaker lifetime , There is no need of another surgery to replace the pacemaker if it fails, additionally the chances of surgical site infections are also very limited..”
Commenting on the success of the surgery, Mr. R Chandrasekar, Facility Director, Fortis Malar Hospital, said, “The dual-chamber leadless pacemaker technology is beneficial for patients who are already on dialysis and blood thinner medication. It helps the patient alleviate the worries about long stay at the hospital after major operation. Once the surgery is completed, they also return to normal life much quicker, than other conventional procedures. I would also like to congratulate Dr. Babu Ezhumalai and the multidisciplinary team of medical experts, infection control team, anesthetists, dieticians, and nurses who worked in close coordination to achieve yet another clinical milestone.”
About Fortis Healthcare Limited
Fortis Healthcare Limited – an IHH Healthcare Berhad Company – is a leading integrated healthcare services provider in India. It is one of the largest healthcare organizations in the country with 27 healthcare facilities (including projects under development), 4100 operational beds and over 419 diagnostics centres (including JVs). Fortis is present in India, United Arab Emirates (UAE) & Sri Lanka. The Company is listed on the BSE Ltd and National Stock Exchange (NSE) of India. It draws strength from its partnership with global major and parent company, IHH, to build upon its culture of world-class patient care and superlative clinical excellence. Fortis employs 23,000 people (including SRL) who share its vision of becoming the world’s most trusted healthcare network. Fortis offers a full spectrum of integrated healthcare services ranging from clinics to quaternary care facilities and a wide range of ancillary services.
Photo Caption1 L-R: J Sophia Ansetta, Medical Superintendent, Fortis Malar Hospital, Adyar, Mr. Chandrasekar – Facility Director, Fortis Malar Hospital, Adyar, Dr. Babu – Interventional Cardiologist, Fortis Malar Hospital, Adyar, Patient who underwent surgery
Photo Caption2 L-R: Mr. Chandrasekar – Facility Director, Fortis Malar Hospital, Adyar, Dr. Babu – Interventional Cardiologist, Fortis Malar Hospital , Adyar, Patient Who Underwent Surgery

The Indian equity benchmarks gained for ........