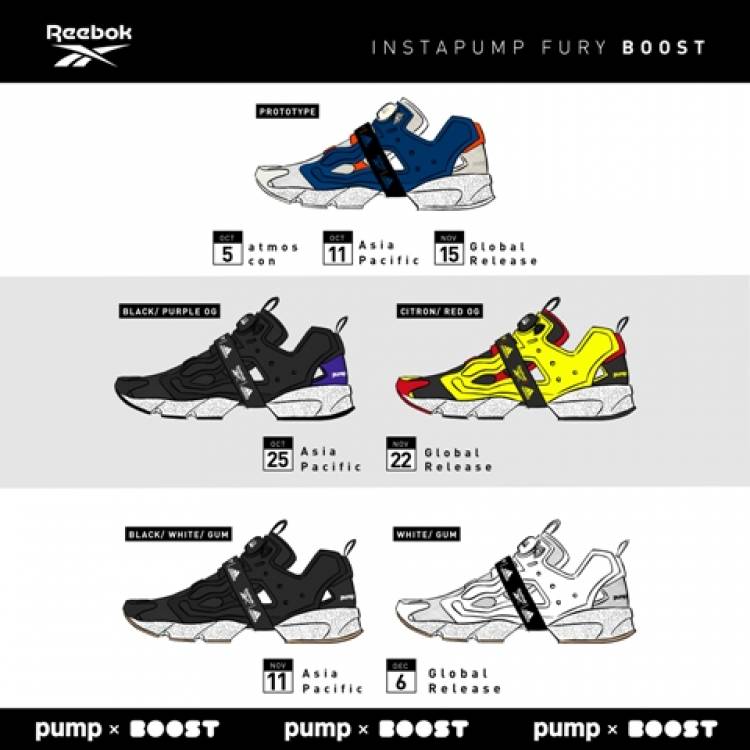 The ultimate statement shoe, the Instapump Fury Boost™ is built for breaking free and creating the unexpected. The trailblazing Instapump Fury has long been the choice of influencers and iconoclasts. Now, with the unrivalled comfort of adidas Boost™ technology, it’s back to push the limits of design and performance.

• “OG Meets OG”: The “OG Meets OG” pack salutes the inaugural Instapump Fury and UltraBOOST™ colorways. The Instapump Fury’s striking high-tech silhouette set it apart from the conventional sneaker scene. However, it was shoe’s daring OG colorway that made it a style icon. Convinced that the Fury had to make a visualstatement, Steven Smith struck on an incendiary citron yellow upper, glowing against crimson and black accents. It was a bold choice that perfectly captured the Fury’s relentlessly inventiveand independent spirit.

• “Black & White”: The Black & White pack is made for the fashion-forward. Featuring immaculate monochrome uppers with a glimmer of metallic GraphLite, its bold futurism is offset by the organic warmth of raw gum outsoles. Clean and balanced, the black and white combination will complement any look and is set to become a street staple. A celebration of pure form, the Black & White pack stays true to Smith’s “no more than what you need” vision.

Fujifilm India Pvt Ltd, a leader in the development and application of imaging and...

Shares of Yes Bank tanked 84.94 percent on the BSE in the intraday trade on Friday,a...

Trump says unproven coronavirus drugs could be 'gift from...

Komaki has been revolutionizing the electric ......