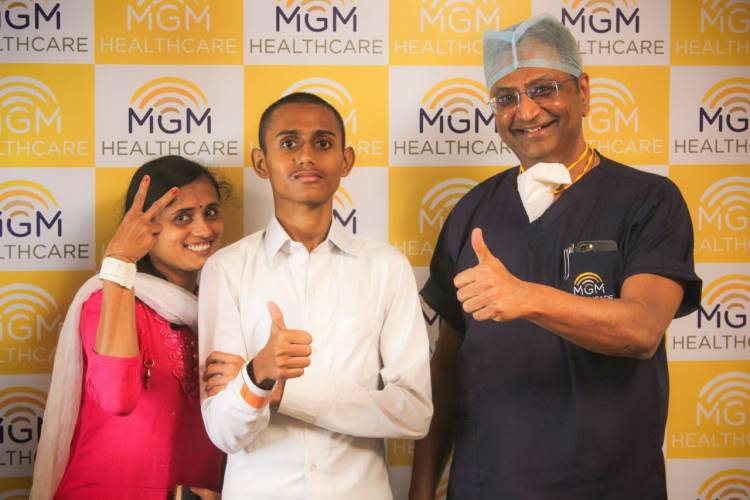 Chennai, 31st August 2021: MGM Healthcare, a super-specialty hospital in the heart of Chennai city, today announced that it has successfully conducted a highly specialised complex surgery to treat a 16-year-old teenager who reported a complex and progressive deformity of spine - Kyphoscoliosis

The patient was suffering from increasing deformity of the spine for the last 6-7 years, but it became more apparent over the last 2 years. It caused complications in day-to-day basic movements for the boy which included standing straight, sitting for a long period of time among other noticeable issues. The patient constantly experienced breathlessness after walking small distances and climbing stairs. He underwent episodes of depression due to this underlying health condition and became low on self-esteem. During this tough period, problems worsened for the family as unfortunately his father passed away and he was faced with the burden of looking after his mother and other members. The patient was then brought to MGM Healthcare Chennai for a thorough evaluation and further course of treatment.

Dr. K Sridhar, Director and Group Head, Institute of Neurosciences & Spinal Disorders, MGM Healthcare shared his views on case and said, “At the Institute of Neuroscience and Spinal Disorders, we evaluated the patient completely. We realized that the cause of the deformity of the spine was a malformed vertebral body in the thoracic spine. Further scans ensured that he did not have any other spine or spinal cord problem contributing to the deformity. We then spoke to the patient’s family and reassured them that surgery would help him stand straight and get rid him of his spinal problems and he would be able to pursue his dreams and take care of his family.”

The team at MGM Healthcare led by Dr K Sridhar planned the surgery meticulously after getting the nod from the patient’s mother. The surgery was performed on 30th July 2021 with continuous Intra-operative Neuro Monitoring which ensured that no harm came to the patient when the spine was being straightened. The surgery went on for about 10 hours and the team led by Dr. K Sridhar, which included Dr. Vijayaraghavan, spine surgeon, performed it to perfection. Anaesthesia and critical care support is very important in such critical and complex surgeries and the Neuro-Anaesthesia team led by Dr. Ponniah Vanamoorthy did a commendable job.

The hospital further reported that the patient’s vitals are fine and the post-operative period has been uneventful. He is able to stand straight now and ready to face the world.

THE NEW NORMAL RETURNS AT VELAMMAL

Cheteshwar Pujara came up with a typically gritty century as India posted 303/4...

Amazon India today facilitated the launch of the Tamil Nadu chapter of the WomenInTech(WiT)...

Over 100 Australian businesses are on their way to India as part of Australia’s...

Moneycontrol, one of India’s leading business and financial platforms under Network18,...

The 103-year-old Chennai based Kalimark Group of Companies, manufacturers of popular...