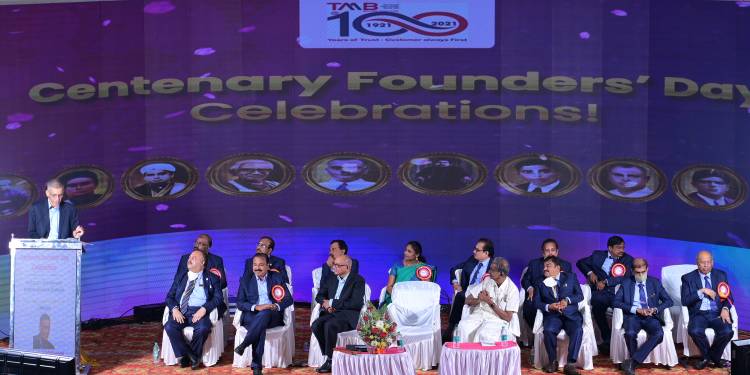 Tamilnad Mercantile Bank Limited in a release to the press has informed the following:

2)    100th e-lobby of the bank was inaugurated by the Smt. T.Charusree, IAS,The Commissioner of Thoothukudi City Muncipal Corporation.

3)    Blood Donation camp/Medical camp orgainsed at Sree Lakshmi Mahal, Thoothukudi. In this camp, 60 nos of blood bags were collected which was handed over to the blood bank.

6)    Welcome speech was delivered by Shri P. Suriaraj General Manager HRD followed by Introduction of Chief Guest to the delegates by Shri A. Shidambaranathan, Vice President of the bank

7)    Chief Guest Shri Gopal Srinivasan was honoured by MD & CEO Shri.         K.V.Rama Moorthy and he delivered his Special Address to all.

8)     Felicitation address was delivered by Shri S. Annamalai, Former Chairman of the bank and Shri C.S.Rajendran Former Director of the bank

9)    A Short Film about CSR Initiatives were screened.

10)  The bank had set a theme of TMB 100 during the Centenary Year to commemorate the completion of 100 years of banking service to the Citizens of India. As a part of the same achievement of activities throughout the bank were announced;

a)    Honoured 100 Frontline warriors nationwide. 5 of them were honoured on the stage.

b)    The bank with the involvement of its branches across India to identify villages in their surroundings and provide necessary assistance to local health workers for achieving 100% vaccination in those villages. It was announced by the bank that 161 no of such villages in which 100% of the people were vaccinated with the joint effort of its branches and local health department.

c)    The bank had identified 100 individual beneficiaries throughout India and provided most needed assistance to them for their convenient livelihood and 3 of them were provided the required assistance on stage.

e)    The bank with a view to provide medical assistance to the needy general public had conducted 100 camps comprising of Medical Camp, Eye Camp, Blood Donation Camp etc throughout India by involving their Branches / Regional offices

f)     Announced Cash donation to the wards of frontline warriors of Covid – 19 who had lost both the parents. 4 of such beneficiaries were honoured on stage.

g)    The bank had kicked off a special vaccination and awareness campaign by dedicating 2 vans for taking health workers, doctors to the remote villages and 2 propaganda vans in association with Times Network in order to achieve 100% vaccination in maximum no of remote villages with the help of health department and the Government of Tamilnadu. The campaign has successfully covered 143 no of villages and helped in vaccinating over 5,187 people living in remote villages of Tamilnadu as on date and schedule to continue this activity until 16th of this month. The crew members of these vehicles used in creating awareness and helping vaccination of more people were honoured on the stage.

11)  The Chief Guest launched the Virtual Museum of the bank which can narrate the history of the bank in a chronological manner to the viewers.

12)  The bank had conducted various competitions in which students of various schools and colleges located in the bank’s branch locations and the Top 3 winners were selected through external judges and honoured on the stage.

13)  Chief Guest Shri Gopal Srinivasan delivered his keynote address about the bank followed by Vote of Thanks delivered by Shri D. Inbamani, GM of the bank

Festive Buffet at Ohri’sEatmor, The best place to meet,...

Ohri’s Eatmor is known for its refreshing menu with great variety.