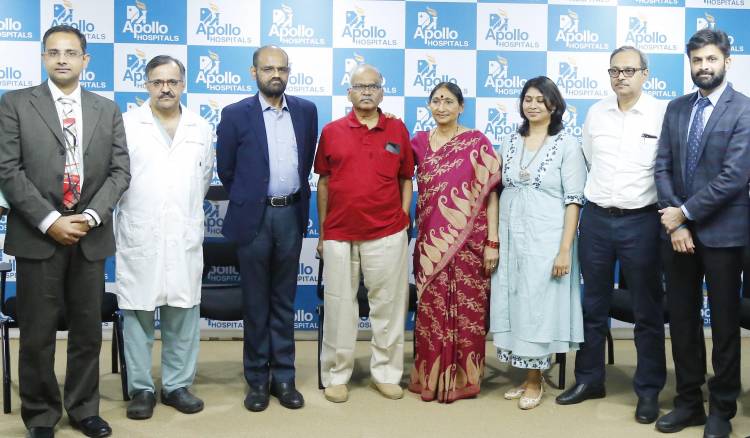 The 67 year old male patient from Hyderabad, Mr Siva Prasad Rao, was suffering from Liver Cirrhosis and Liver cancer. During evaluation for liver transplant he was found to have significant coronary artery disease with critical blocks in the blood vessels to the heart. The heart disease was found to be significant enough to preclude performing a liver transplant. Coronary stenting was not an option as, after stenting, liver transplant could not be carried out for 8-12 weeks, and waiting was not an option as the patient’s liver cancer could spread during the waiting time. The multidisciplinary team at Apollo Hospitals, decided to perform both the operation, Liver transplant and Coronary Artery Bypass at the same time.

The patient’s 33 year old daughter, Mrs Rohini, came forward to donate a part of her liver. The operations were carried out on December 6th, 2019. CABG was done first followed by Living donor liver transplant. The Living-donor liver transplant is a surgical procedure in which a portion of the liver from a healthy living person, in this case the patient's daughter was removed and transplanted in the patient. The entire operation took 14 hours to complete. The donor was discharged on 6th Day after operation and the patient was discharged on 12th day after the operation. Both the patient and donor are doing fine.

Meticulous planning, carefully timing the donor and recipient surgery and availing all concerned specialty services when needed, as recipient had to undergo cardiac bypass surgery first and then followed by liver transplant, ensured incident free treatment, says Dr Manish C. Varma. This is the second of its type surgery done at Apollo Hospitals, four years ago we did a similar combination surgery on a small baby four years ago, which was the first of its kind in the world, than. The decision of patient's daughter to donate part of her liver is heroic, which really saved her father.

Not just in India, even abroad in the best of the medical centres, a patient in an advanced age coupled with multiple complications like liver cirrhosis, liver cancer and critical blocks in the heart, would have been avoided for further care, most experienced medical teams wouldn't have dared to go further. But the doctors at Apollo took on the challenge, as they were confident of their expertise and the back-up infrastructure and support at their disposal. This will be recorded in the annals of medical history and will serve as an inspiration for the Indian medical fraternity for generations, says Dr Hari Prasad. Most often the treating doctors give up on seeing complications beyond their realm, but if they start exploring options by taking the support from across specialities and work in unison, they can save many lives and that is the underlying message from this particular case. Here each of the surgeries, CABG and Liver Transplant were major and complex surgeries, doing one after another to give space for patient to cope and recover from each of them wouldn't have saved the life of the patient and not treating the patient was not an option at all as the tumour was progressing rapidly and he wouldn't have survived for long. This is definitely a message to the medical fraternity world over to not to give up, there are opportunities and solutions to treat most complicated ailments and we need to put our minds together across specialities and through teamwork can save such critical patients. Also the message has to go to the layman that donating a part of you liver actually saves lives, without impacting you in any manner, without restricting you and without having any after-effects on you in any manner.

Dr Manoj Agarwala said, both the vessels of the patient were very critical, almost 80-90% of his heart was at risk, in fact right coronary was almost 99% blocked and at high risk, it seemed impossible to do a liver transplant for him with his state of the heart. But since the tumour was spreading fast, we had no option but to perform both CABG and Liver transplant one after another in one sitting. If his heart condition was not  assessed properly, the patient would have been lost during the transplant.

Mr Siva Prasad Rao said, when I heard of all the complications that I was suffering from, I just gave up hope on me surviving further, just wanted to leave it to destination in the short time I would live. But it was my daughter who went about with everything getting herself prepared for the donation and preparing me for the treatment. That's when I gained hope and as an official at NABARD, I had seen several of my staff members getting cured of most critical complications at Apollo Hospitals, that gave me the necessary confidence, also there was no alternative for me, either do or die. But my worry was only about my daughter and grandson. Today, when I look back it all seems to be a dream and nothing less than a miracle with two major surgeries I underwent in one sitting. The Health Insurance guys were astonished, so is the case with my relatives and friends, none would believe that I underwent two surgeries that too major ones.

Patient's daughter Mrs Rohini said, dad had an accidental fall in October and one problem led to another as far as his health was concerned and we came to know he had a tumour in the liver, spreading rapidly and transplant was the only option. Though I am well educated, I was ignorant of the fact that liver could regenerate in 6 to 8 weeks after donation and one can lead a completely normal life thereafter. October, 2019, is when I was enlightened about this. I was scared initially to donate liver, as I also have a two and half year old son and was really worried about him and his future, if in case something goes wrong with me who will take care of him. But on the other hand was guilty of me not helping my father. Therefore I was looking for options like getting the liver from a cadaver, but that had a long wait list and one was not sure when we would get it. Since we didn't have much time as his heart and liver were at risk and the fact that we might lose dad made me to explore the option of living donor. Liver donation is painful and surgery is scary, but saving some one's life is a much bigger satisfaction than all that trauma, everyone in a situation like that should go ahead and donate. No parent will ask you to donate your liver in such a situation, they don't want their children to suffer for their sake, it is we who should be magnanimous to our parents and come forward and donate.

It was in 1983, that Dr. Prathap Reddy made a pioneering endeavor by launching India's first corporate hospital - Apollo Hospital in Chennai. Now, as Asia largest and most trusted healthcare group, its presence includes 8,488 beds across 51 Hospitals, 1,586 Pharmacies, 92 Primary Care and Diagnostic Clinics, 100 Telemedicine units across 10 countries. Health Insurance services, Global Projects Consultancy, 15 colleges of Nursing and Hospital Management and a Research Foundation with a focus on global Clinical Trials, epidemiological studies, stem cell & genetic research and the first Proton Therapy Centre across Asia, Africa and Australia.

In a rare honour, the Government of India issued a commemorative stamp in recognition of Apollo's contribution, the first for a healthcare organization. Apollo Hospitals Chairman, Dr. Prathap C Reddy, was conferred with the prestigious Padma Vibhushan in 2010. For more than 28 years, the Apollo Hospitals Group has continuously excelled and maintained leadership in medical innovation, world-class clinical services and cutting-edge technology. Our hospitals are consistently ranked amongst the best hospitals globally for advanced medical services and research.

Dance vs Dance season 2 to pay tribute to renowned choreographers...