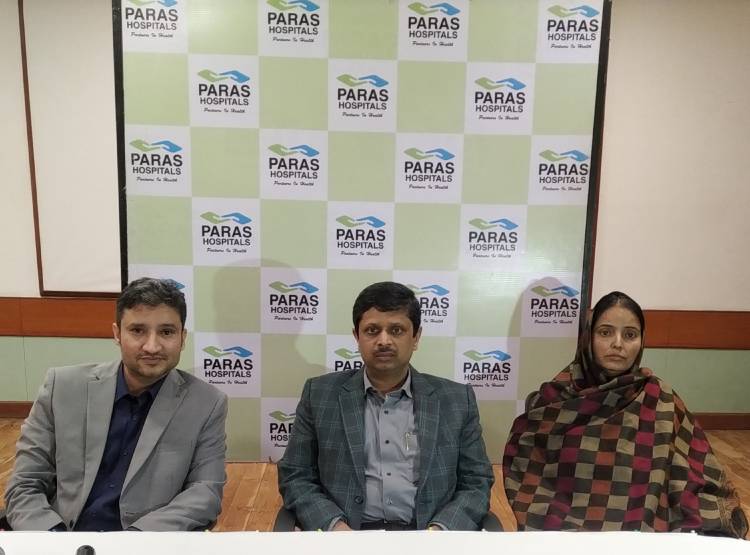 ·The patient had immense pain in the right side of abdomen

·These type of tumours are very resistant to chemotherapy and radiotherapy, her only chances of survival was surgery

·Patient is now recovering after the six hour-long surgery

Paras Hospitals, Gurugram, known for performing multitude of advanced oncology procedure, has become one of the rare hospitals in Delhi & NCR to successfully perform a complex tumour surgery on a 45-year-old patient, Ms. Sandhya, from Gurgaon had pain in right side of abdomen due to the presence of an 11 cm tumour arising from inferior venacava ( a large vessel taking blood from the lower half of body), involving aorta ( the main vessel supplying blood to the whole body) and right kidney.

Leiomyosarcoma is the primary malignant tumor and affects the inferior venacava (IVC), and it originates from the parietal muscle cells of the vessel. Approximately 74% of leiomyosarcomas of the IVC affect women between 40 and 60 years of age (15). Surgical management of such cancers require advance facilities and in Paras Hospital a team of oncologist, urologist, oncosurgeon and vascular surgeons have come to the patient’s rescue.

Chief Of Urology, Dr Anurag Khaitan, who has led the team, said, “This is one of the very rare tumours. As the location was in the very difficult area and surgery was very complex, she was refused surgery in many hospitals she visited. Then she approached the department of Urology Paras Hospital. We did advanced testing with PET Scan and CT guided Biopsy. It showed a high grade sarcoma. As these types of tumours are very resistant to chemotherapy and radiotherapy, her only chance of survival was surgery. We did the surgery, which went for six hours and we could remove the tumour completely. Patient tolerated surgery very well and is now recovering.”

“Since the tumour was attached with inferior venacava and aorta, we thought initially that we might have to remove these blood veins as well while performing the surgery. If we remove them, then we have to put some veins there. With the help of all the surgeons, we successfully took out the 11 cm tumour,” said Dr Sumit Sharma, Senior Consultant, Urology, Paras Hospital.

Avishkaar to offer curated online courses with every computing...

Jain University (deemed-to-be), is a top ranked university and has over a decade...

Within just 4 years of its launch, Maruti Suzuki Vitara Brezza, India’s No. 1 compact...