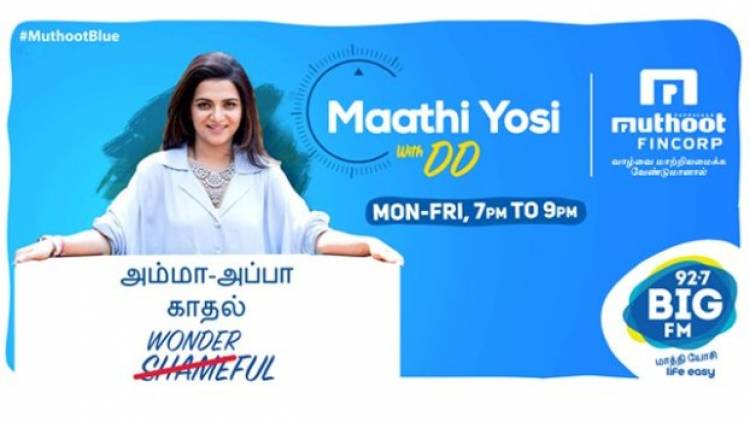 Adding further cheer down south, 92.7 BIG FM is raising the entertainment quotient with a new show in Chennai, titled ‘Maathi Yosi’. The show, hosted by popular TV anchor turned RJ DD, is the regional version of 92.7 BIG FM's recently launched show ''Dhun Badal Ke Toh Dekho with Vidya Balan'' which airs across the network's Hindi speaking markets. The RJ in Chennai, who has also been a well-known television presenter, strikes an engaging conversation around topics that play an instrumental role towards the growth of society. There is a special segment ‘Maathi Yosi Moment’ in the show where RJ DD encourages the 'Maathi Yosi' ideas, inspired from real life scenarios, shared by the people at the grassroots level. The new show’s guest is well-known businessman Mr. K.R. Nagarajan who has overcome hurdles aplenty and is successfully running his business – Ramraj Cotton successfully in Tamil Nadu. RJ DD speaks to him on ‘Breaking the Glass Ceiling’ on the upcoming episode of the show.

When asked by RJ DD about how tough is to follow an unconventional path, Nagarajan said, “Every businessman chooses to follow the same path, but I chose to create my own. Doing so has gotten me where I am today and made this business a successful enterprise. I started RAMRAJ in 1983 with a humble beginning and the intent to offer my employees good money in exchange of hard work hence giving them a better livelihood. I began with 10 employees and kept on adding as the business grew. And that is how the whole community developed.”

MUTHOOT BLUE MAATHI YOSI WITH DD presented by MUTHOOT FINCORP is the regional version of 92.7 BIG FM's recently launched show ''Dhun Badal Ke Toh Dekho with Vidya Balan'' which focuses on bringing imperative social topics to the forefront. The show airs every weekday evening from 7pm to 9pm, with repeats on Saturday and Sunday. In addition to that, a special segment – ‘MAATHI YOSI MOMENT’ with intent to bring positive change highlight the extraordinary stories of real people in the show.

Share Love with your Mommy this Mother’s Day with Amazon.in

With the support of the Ministry of Tribal Affairs .......