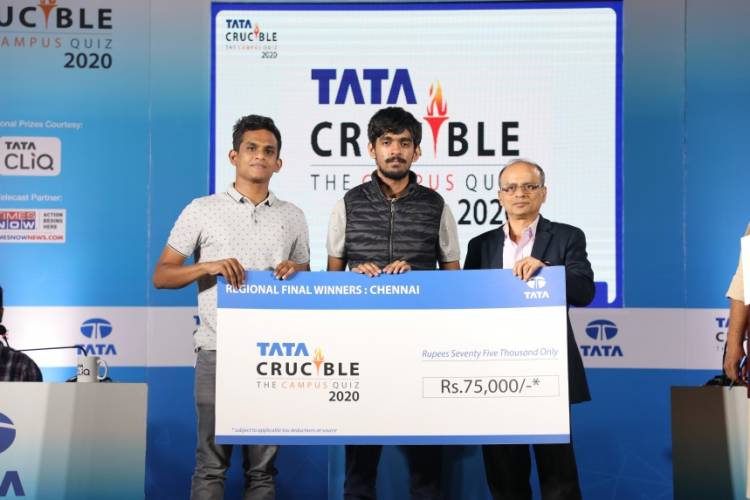 A total of 938 teams battled it out in the city level finale for the top honors, held at Music Academy Auditorium, Chennai. Pranav Hari & Rahul Humayun took home a cash prize of Rs. 75,000* and will compete in the zonal round to qualify for the national finale. Aarathi Suresh & Samrithi Ranganathan from Ethiraj College for Women, Chennai were declared runners-up, winning a cash prize of Rs. 35,000*. Mr. Suresh Raman, Vice-President and Regional Head- TCS Operations from Tata Consultancy Services was the chief guest at the finale.

The theme for this year’s quiz is built around ‘Industry 4.0 concept. Noted quizmaster ‘Pickbrain’ Giri Balasubramaniam hosted the quiz in his masterful, unique and witty style.

The sixteenth edition of India’s biggest campus quiz will be held for a little over two months, traversing 40 cities, with five zonal rounds leading to the Grand National finale in Mumbai. The winners of the National Finals will receive a Grand Prize of Rs. 5, 00,000/-* along with the coveted Tata Crucible trophy.

The prizes for this edition of Tata Crucible Campus Quiz are being supported by Tata Cliq.

All details of the quiz are available on www.tatacrucible.com

BJP protests over disruption of parliament

Members of the ruling Bharatiya Janata Party on Friday staged a protest at the parliament...