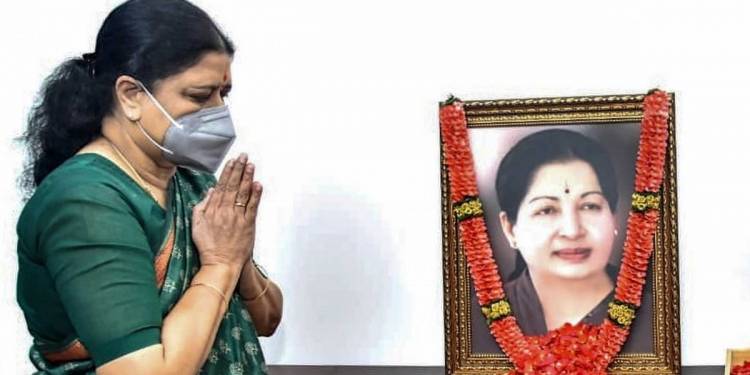 Sasikala has decided to visit Jayalalithaa’s memorial at Marina Beach on October 16, a day ahead of AIADMK entering its Golden Jubilee year.

She has also planned to visit party founder MG Ramachandran's residence on October 17 and initiate a state tour to visit various party functionaries.

As per sources, AIADMK Deputy Coordinator Edappadi K Palaniswami is said to have made plans to become the party's general secretary, which has not gone well with party coordinator O Panneerselvam's camp.

With several Directorate of Vigilance and Anti-Corruption (DVAC) cases against Palaniswami's deputies and the DMK government reinitiating the Kodanadu case, Sasikala has reportedly decided to go ahead with her decision to meet party functionaries.

After being released from Parapanna Agrahara Jail in Bengaluru earlier this year, Sasikala made a surprise announcement by saying that she would stay away from politics. This, she explained later, through her phone calls with partymen stating that she decided to stay away as Palaniswami and Dhinakaran couldn't find a common ground amid the feud within the party.

But after AIADMK lost the assembly elections earlier this year, Sasikala announced in May that she was entering politics again to revive the party and would meet cadres after the Covid-19 situation improves.

Several partymen who spoke with Sasikala were removed from the party, but the move couldn't stop AIADMK cadres from talking to her.

Sasikala has decided on a state tour and sources also suggest that several former ministers not belonging to the Palaniswami camp have already extended support to her.

SunnyBee Kickstarts Its Week-long Mango Mela with an exclusive...

Offering a fitting tribute to the season .....

CHARUKESI, the new stage production by UAA in its 70th...