‘We have made education a political priority,’ says Manish Sisodia at GITAM 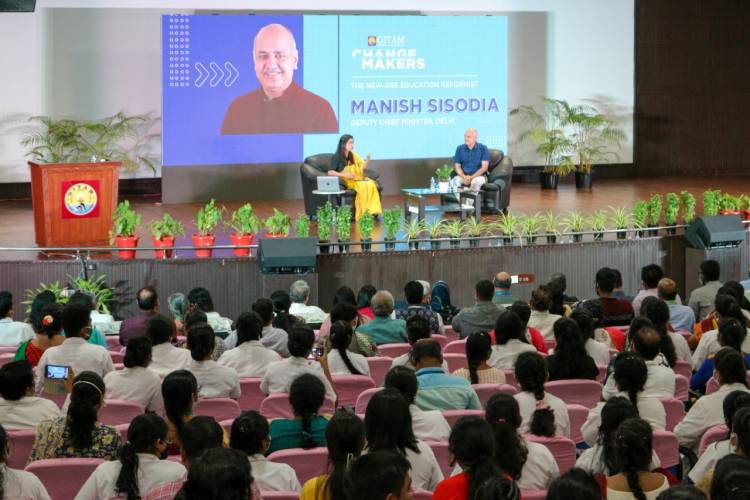 ‘We have made education a political priority,’ says Manish Sisodia at GITAM

We have made education a political priority,’ says Manish Sisodia at GITAM

The Deputy Chief Minister, Delhi, addressed students, academicians, and civil society members as part of the Change Makers series initiated by GITAM (Deemed to be University)

*Hyderabad / April 25, 2022*: Manish Sisodia, Deputy Chief Minister, Delhi was present at the GITAM (Deemed to be University) Vizag campus to address students, academicians, and civil society members as part of their Changemakers series. As part of the exclusive series, national and global leaders visit GITAM campuses, and share their dynamic insights, providing an outside the classroom learning opportunity for teachers and students.

Mr Sisodia spoke at length about the Delhi Government’s education initiatives, the mission and vision behind these initiatives, his growing up years, the transition from activism to politics, adopting participative democratic methods and much more.

He started by talking about his vision for education, “In the last seven years, people of Delhi have given us the opportunity to work on governance and I don’t know if we can say it has transformed, but there is definitely a beginning. In Delhi, we have worked in two folds – one is fixing the problem of education system and using education to fix the problems of the society.”

Explaining on how the change was brought about he said, “We increased the budget allocated to education and we’ve used this money to improve infrastructure - which is always a work in progress. We’ve started training programmes for teachers. We send our government school teachers to universities such as Harvard and Columbia and countries like Singapore and Finland. We want the teachers to provide world-class education, but they can only do that when they know what the rest of the world is doing in the field of education. We’ve also tried to shift the focus of classroom teaching to producing good learning outcomes.”

About using education to fix the problems of the society, he said, “Education is necessary to deliver not only skills, but also a change the mindset. Happiness mindset is missing, entrepreneurship mindset is missing and the mindset that we all belong to one nation and must work together as a team is also missing. So, we’ve introduced three curriculums to produce these mindsets in future citizens. It’s not enough to score high marks, it is also important to have the right mindset to thrive in society.”

Answering a question about AAP’s attempts to foster a participative democracy in society, he gave the example of how the budget preparation process for the Delhi government is inclusive, which considers the inputs of various stakeholders like traders and market associations etc.

Talking about hosting *Manish Sisodia, M. Sri Bharat, President, GITAM* (Deemed to be University) said, “It was our pleasure to have Mr. Sisodia, amongst us today and inspire our faculty members and students to bring a positive change in the society through their own respective subjects and area of specialisations. Anecdotes from his life will be good guiding principles, especially for the students.”

*Mr. Sisodia* spoke about moving from journalism to RTI activism and then to politics. He said, “RTI should be strengthened because my belief is that the correct thing will be done only when there is transparency. That is because an act like RTI forces those in power to be accountable. Those in governance should always be afraid of the public questioning them, their actions, and motives. That is important for good, responsible governance.”

KTM, the European Racing Legend, organized yet another successful version of “Orange...

India and South Korea on Thursday exchanged views on global developments and contemporary...