BSP-SP announce tie up for LS polls, keep Congress out of it 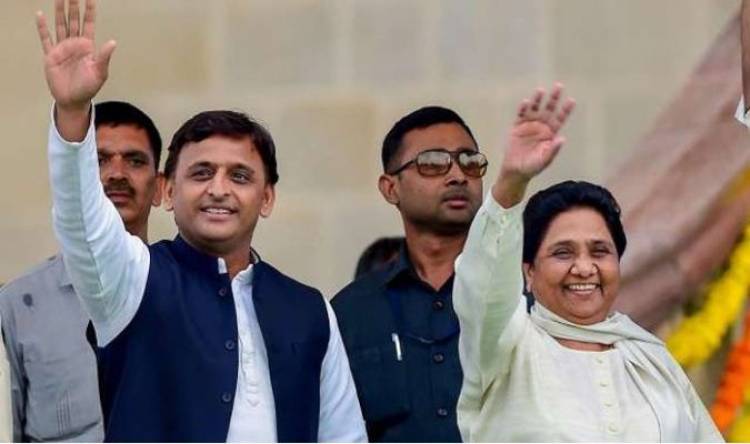 LUCKNOW: Arch rivals for over 25 years, the BSP and SP announced on Saturday that they will contest the coming Lok Sabha polls together in Uttar Pradesh sharing 38 seats each of the 80 in the state, while leaving Rae Bareli and Amethi for Congress, which has been kept out of the alliance.

"The Bahujan Samaj Party and Samajwadi Party will each contest 38 seats while two seats have been left for one or two parties. We have also decided to leave Amethi and Rae Bareli seats for Congress though we do not have alliance with it," Mayawati said at a joint conference here with SP chief Akhilesh Yadav.

Answering questions, Mayawati called the alliance a "permanent phenomenon" that would not only sound the "end of the dictatorial, arrogant and anti-people the BJP" but one that would last beyond the 2019 general election and also go in the 2022 state Assembly polls.

The two parties will keep their personal differences aside to end "the monstrous rule" of the Bharatiya Janata Party (BJP), she said.

On his part, Akhilesh Yadav hinted at supporting Mayawati as a Prime Ministerial candidate.

"Uttar Pradesh has produced numerous prime ministers in the past. You know whom I will support. I will be happy if another prime minister comes from the state."

Mayawati described the alliance also as a "new political revolution" taken in national interest to stop the BJP from coming to power again.

The four-time Uttar Pradesh Chief Minister started her address by saying that what she was about to say and announce would give anxious and sleepless moments to the "guru-chela" duo of Prime Minister Narendra Modi and BJP National President Amit Shah.

She also said that the BJP was rattled at the fact that the two regional parties had buried a long-standing animosity and that it was letting loose government agencies to thwart the alliance.

"But here we are formally coming together, to ensure that at all costs, the BJP is not allowed to return to power but also to give relief to the teeming millions who were suffering at the hands of the faulty and anti-people policies of the BJP government at the Centre and in many states", the Dalit leader announced.

Making it clear that the deep differences and simmering hostility between the BSP-SP were "now things of the past", Mayawati also said that in "larger public interest she had even decided to overlook the infamous June 1995 murderous attack on her by SP workers".

Listing a host of problems like demonetisation, rolling out of the GST, agrarian distress, marginalisation of the poor, Dalits, downtrodden and farmers, Mayawati, who looked very much in control at the conference, also said that the alliance was set to knock out the BJP as they successfully did in the 1993 state Assembly polls when the late Kanshiram and Mulayam Singh Yadav came together to form the government.

She went on to bracket the BJP and the Congress on the same page, saying their "ideology and the working style" was similar.

The BSP supremo also alleged that while the people did not profit in governments of both the Congress and BJP, even defence scams took place under their watch.

"If Bofors was responsible for the ouster of the Congress government at the centre in the 90's, the BJP will go down soon due to the Rafale jet fighter scam" she said.

Explaining the reason for keeping the Congress out of the alliance, Mayawati said it was because of past experiences and electoral history showed that while the vote of the BSP and SP shifted to the Congress in toto, it did never happen vice versa.

The coming together of the two parties, which were swept away by the Modi wave in the 2014 Lok Sabha and the subsequent Assembly polls in 2017, has been viewed by analysts as a possible game changer.

In the 2014 Lok Sabha polls, the BJP won 71 seats on its own while its ally Apna Dal picked up two. The BSP drew nil, while the SP won five and Congress two -- all family pocketboroughs.

Mayawati said the seat-sharing between two parties was decided at a meeting in Delhi on January 4 and the distribution of seats has also been broadly worked out.

It will be made public through a press release.

She said Amethi, which is represented by Congress President Rahul Gandhi and Rae Barelli, represented by UPA Chairperson Sonia Gandhi, have been left for Congress as they do not want BJP to "complicate" matters.

Mayawati said ever since reports of the tie up between the two parties had appeared, the BJP got "scared" and conspired to weaken the alliance as part of its strategy.

It was "misusing" state machinery and targeting Akhilesh Yadav, whose name cropped up in the media in the alleged mining scam.

"The BJP should know that after this the alliance has got further strengthened," she said and appealed to people not to waste their votes on outfits like Shivpal Yadav, Akhilesh Yadav's estranged uncle, on whom "the BJP is splashing money like water".

She suggested that as part of this strategy, parties may be floated to attract Muslim votes.

Akhilesh Yadav said that he decided to have an alliance with the BSP ever since the BJP leaders "drunk with power" abused her. In future, any insult to Mayawati will be his personal insult, he said appealing to SP workers to work in the spirit of brotherhood with BSP cadre.

The Dalit leader also compared the current situation in the country to that in 1977 and said while the Congress had imposed the Emergency then, now it is a state of "undeclared emergency".

Mayawati however parried questions on whether she would contest the Lok Sabha polls or not.

"In due time, you will be informed of this also," she said smiling.