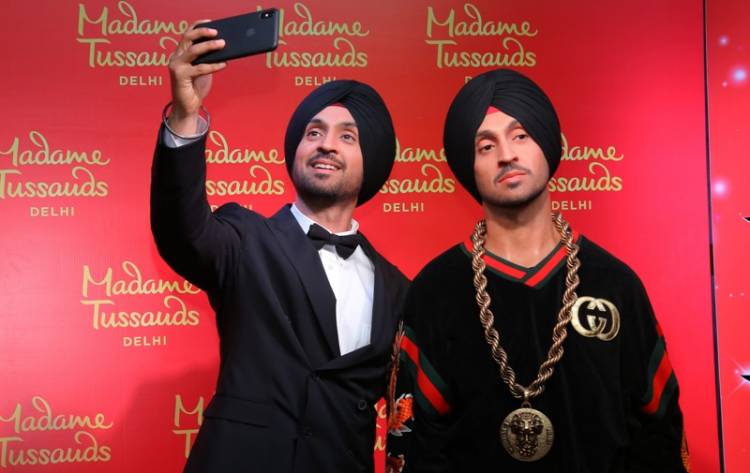 The Punjabi sensation who has a massive fan following, joined other famous artists from across the globe to be featured in Madame Tussauds. His figure has been placed in the music zone to allow fans to sing, pose, groove, interact and capture moments with the singing and acting sensation.

With remarkable blockbuster performances in films like Udta Punjab, Phillauri and Soorma, the singer-actor has truly bowled the nation over with his impactful performances. With a record of over million followers and recognition from both Punjabi and Hindi industry, the young legend has made a mark in a very short span. Diljit is deeply rooted in his tradition and has won several national and international awards such as Filmfare, IIFA, Brit Asia TV Music etc. Diljit has also bagged the coveted, Dada Saheb Phalke Award for most trending personality in 2018.

Privileged Diljit Dosanjh said, “I am excited to share the spotlight with such renowned artistes from India and abroad. I am thankful to the entire team at Madame Tussauds for their efforts and dedication for making a real-life figure of me, bringing me a little closer to my fans. I invite all my fans to visit Madame Tussauds Delhi and celebrate this incredible piece of art.”

Mr. Anshul Jain, General Manager, and Director, Merlin Entertainments India Pvt. Ltd. said, “As a young trendsetter and talented artist with a huge fan following, Diljit was an obvious choice for us. He is the first turbaned figure to be featured at Madame Tussauds. The entire journey from sitting session till the creation of his final figure has been very special for us. The earlier cancellation of the unveiling in keeping the national sentiments has doubled the craze amongst his fans who are eager to meet him. We can barely wait to capture responses of the visitors experiencing a moment of a lifetime with the superstar only at the world most famous wax attraction for families, The Madame Tussauds Delhi.”

Fans of the Punjabi superstar can experience his figure from the 29th of March onwards at Madame Tussauds Delhi by booking their tickets online at the official website https://www.madametussauds.com/delhi/en/

Madame Tussauds Delhi is world’s most famous wax attraction that opened in the outer circle of Connaught Place, New Delhi. With a grand launch in December 2017, the attraction opened its door for families to walk the red carpet and interact with their favorite celebrities and icons.

Iran’s supreme leader Ayatollah Ali Khamenei on Monday prayed over the remains of...

SRM IST - Faculty of Science and Humanities, Chennai have...

As an initiative to create awareness among the younger generation about “Say No...